What does "traditional" mean when we're talking of climbing? It depends on what you need to have the feeling you're off the beaten track! Some of us are feeling adventurous if the pitons are far from each others. For others, it will take a whole piton-free pitch before to experience the same feeling. The surroundings of the route also are significant parameters: the remoteness, the altitude, the accessibility, the quality of the rock... Finally, a traditional climbing route is not only a sport, but a quest: the climber will have to contemplate the consequences of undertaking  a non-equiped pitch, make choices about the route, about where to cling protections...

In the climber's dialect, we usually call a trad climbing route, a route which is not fully equiped and to which it will be necessary to add more protections.

Here are the milestones of this kind of climbing:

We often follow the cracks. As a matter of fact, the proctections we add are way more reliable on cracked rock: camalots, stopers, hexentrics. All these protections are gathered under one word: nuts, which are made FOR cracks. Cracks with parallel edges, cracks in a V-shap, each crack has its nut. Among all the nuts, the camalots are your best friend because they adapt to almost every kind of crack.


We also use natural protections invented way before the mechanical nuts existed: a ring around a bloc of rock, stuck knots and even "lunules" which are rings of rope going through a hole in the rock and creating a belaying point.


In order to set all the protections needed to avoid taking any risk, one of the milestone of Trad Climbing is to find positions of rest. But not a fake flat in one hand which would merely give you enought time to get a quickdraw to cling to a bolt. You will need to hold on in this position for a little time, while you're choosing the right size of nut. Once you found the good one, you will have to try to stick it in different ways in order to find the position in which it won't blow off in case of fall. It is important to pay great attention to this stage because it will enable you to serenely climb up some yards until you consider it usefull to protect yourself again.
You can now understand that Trad Climbing sharpens the anticipation abilities of the climber who must plan yards ahead in order to not get trapped in a too difficult path with no protection.
Once the nuts are set, you have to set up the rope. But which rope? In Trad Climbing we use "half ropes" most of the time. The more precarious the protection is, the more essential it becomes to hang only one strand of the rope. As a matter of fact, the stretch of a single strand absorbs more energy, in case of fall, than two strands would. In Trad Climbing, as we depend on favourable spaces to stick nuts, it won't be possible to line them up. In setting wisely one strand of the rope in a nut on the left and the other strand in a nut which lies far on the right, your protections will soften the blow.


The last milestone of trad climbing the pitons hat we thrust in cracks with a hammer. Climbing guidebooks are not accurate at all about the number of pitons needed, if any. Most of the regular routes in Trad Climbing won't need any added pitons as the essential ones already are permanently installed.

Despite that, it is recommended to bring a hammer and some nails in case of an old nail gets pulled out. When the route really needs to hammer in pitons, two hammers are needed: the last person on the rope will need to get the pitons back, in order to use them again in the next pitch.

Don't rush, there will be enough camalots for everyone in your favorite mountain goods store! 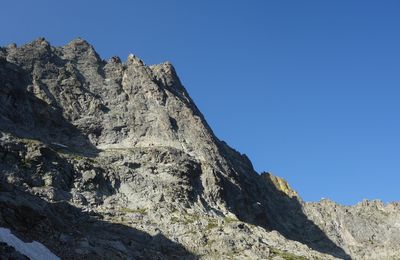